So, a couple of years ago I decided to get cheap, realistic-ish CO2 pistols for practicing in the garage: a Crosman 357 (which looks like a Python) and a 1088 (which I guess is supposed to evoke a Sig 2022), since the latter might fit the moppet's hands better. Unfortunately, said moppet did not take to hers with any enthusiasm. In any case, the 1088 did not turn out to be accurate enough to be very rewarding, despite its rifled barrel.

OTOH, the "357" is surprisingly non-bad. The trigger is pretty clunky. I think I paid $60, and that included a nylon holster, so I didn't expect a real snake gun. Single-action is OK: minimal creep but the break is a bit heavier than I'd like for precise shooting. Double action stacks a bit. The worst thing is the DA reset, which is loose and rattly, and if you're trying to shoot quickly, it's easy to get a partial reset in which the second pull advances the cylinder, but doesn't actually reset the firing mechanism, so if you then make a third, complete and correct pull, there is an unfired pellet in the magazine position past the second one you just fired. Screws up your score when trying to practice rapid fire for the Bullseye match! I guess the solution would be to load all ten holes in the cylinder and keep count until five successful shots (or the 15 second timer) have gone off.

The good part is the accuracy. Shooting at scaled targets, my Bullseye match scores are not much different than my actual scores shot at 50 feet with my S&W K22 (and they're a hell of a lot better than my centerfire scores shot with my Redhawk...recoil do take a bite, don't she?). Maybe I got an unusually good one, so don't hold me to this, but I'm surprised at how decent it is. At 17 feet, I don't get a lot of 5-shot groups that can be covered with a nickel, but it has happened, and I'm not blaming the gun when it doesn't. I've had quite a few targets with 3 or 4 shots in a tight group and one or two I yanked badly out. Last year I bought an FAS 6004, which seems much nicer, but didn't shrink my groups that much. It also doesn't like to work when it's cold in the garage, while the Crosman has never let me down, even in near-freezing temps. Yesterday, I shot 5 from each off an improvised bench-rest, with the FAS on the left in the photo below.

You can tell by the sound and the penetration into the cardboard target that it is zippier than the FAS. I pretty much only shoot the wadcutters from the can shown in the picture, but it will shoot the heavier pointed or hollowpoint pellets. I don't think I'd try killing anything bigger than a sparrow with it. MAYBE I'd try a pointed pellet for a brain shot on a squirrel if there were no witnesses and I could get within a dozen feet. I have no desire to kill sparrows, so I stick to killing paper and my self-esteem.

I'm think I've put around 4000 pellets through it. Works pretty much the same as when new. I can't complain about that. I've also shot a couple dozen BBs, but forget about that. Pellets work better. I don't keep track, but I guess I get 50 to 70 good shots from each CO2 cylinder. When it starts to sound feeble, I stop loading pellets and just do the blank wall drill dry-firing at the side of an old freezer. That usually shows why my groups aren't better!

Unfortunately, I don't think this exact gun is still in production. First two links are the model I have. The third is the currently available model. From the cylinder back, it looks identical, and spare magazines are interchangeable. I'm guessing they just made a new mold for the plastic barrel shroud. Maybe Crosman decided the Python was too much like your grandfather's Oldsmobile, and all the cool kids want a rail on their revolver. Hopefully they didn't screw it up.

I'm only killing paper and my self-esteem.

I bought one of these to train new shooters. 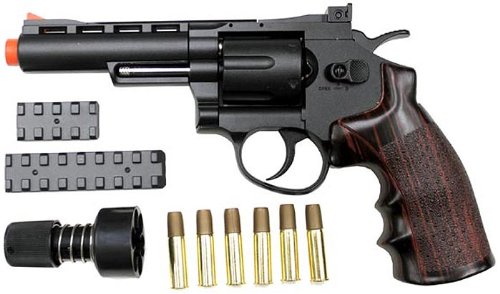 It' airsoft and loads like a regular revolver. I can manage fist-sized groups rapid-firing from 15 feet.

Not cheap though. But fun and a great training tool.

Nice. It's a great way to practice if you're limited in town. I can shoot in the back yard with the kids as long as we don't cross the property line. So we put up a backstop, have our fence 15-20 feet behind and shoot downward at targets using one or two pumps in pump air rifles.

I thought about getting one of these, http://www.pyramydair.com/s/m/Gletcher_ ... Black/3572

But a guy sold me a real one for a similar price.

The ammo costs more though.

I should look at one of those to help train the kids in hand gun use. I can use their grandpa's single action Ruger 22lr/22mag too.
Brian
Top

Or if you have a gun in one of these calibers, you could get Speer's plastic bullets and cases, only propelled by primers:

They can be used indoors as long as you have good ventilation.

My second airgun ever was a crosman 357. Still have it.

There are better. If you want a good, cheap, small pest control pistol try the 2240
Top

I've got both of those as well. Accurate and inexpensive. Good for sight/trigger discipline, but not if you have a flinching problem as there isn't any recoil

It fits perfectly in the holster that came with my SIG/GSG 1911-22, and feels remarkably similar in the hands.

I use it with a .22 bullet trap and 3" Shoot-N-C targets stuck on some cardboard cut to fit in just right, from about 20'. A steel BB can bounce back out if you get it just right! I also ended up lining the box with some of those stick-on tar sheets you can get at the home store to reduce the metal "ding!" it produces.

I had some other fun reactive targets set up on about 6-7 lagers of thick cardboard as well, but it would penetrate those too frequently for my liking.
The wife's classic Daisy spring-fired rifle would do just fine though.

This, along with a LaserLyte system are the 2 best things I've done to improve my pistol shooting.
Brian in StL