This experiment was driven by this thread about firing rifles from the Rice Paddy Prone position:

In there, I posted this picture of Ishi firing his bow. 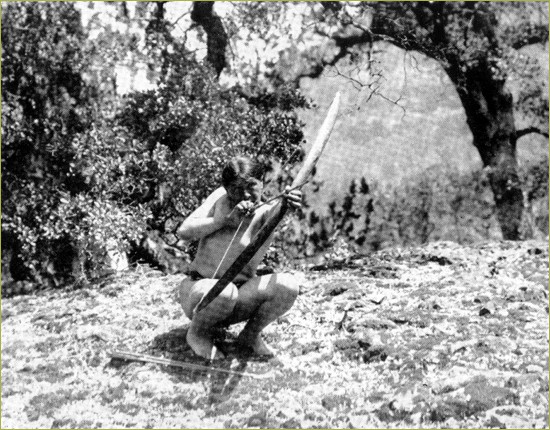 My recurve, strung, is about five feet long. That means it gives me about two and a half feet above the ground from my horizontal bow arm if I squat in this position. I squatted and found enough room above the ground, by many inches.

I could imagine the scenario wherein Ishi would have to shoot from this position. It might be that over hanging brush forced the squat, or it might be that rising higher than the squat would expose Ishi to view by his deer or rabbit quarry. I could develop both these scenarios in my kitchen.

I put my wife, cats, and dog in the living room to watch Fareed Zakaria interview Vladimir Putin (06/19/2016 CNN) while I listened from the kitchen. Great interview if you can catch it online. If I stood, my arrow would hit the door jamb. I squatted. At first, drawing was awkward, but quickly I adapted. My bow tip was several inches above the ground.

My groups were bigger than normal, but I think if I shot half this way and half standing each time, I'd quickly have both groups of the same size.

Try it. For kicks and giggles and the funny noises that come out of your knees...

Ishi, the patron saint of flintknappers.
"There never was a union of church and state which did not bring serious evils to religion."
The Right Reverend John England, first Roman Catholic Bishop of Charleston SC, 1825.
Top
Post Reply
2 posts • Page 1 of 1