By Ashley Brugnone, CMP Writer  Cynthia and Cindy Hernandez, both 17 of Reseda, Calif., have always been close – so close, they were even born on the same day. “We pretty much do everything together,” Cindy said of her twin, Cynthia. “It’s natural for twins to be the closest to each other.” 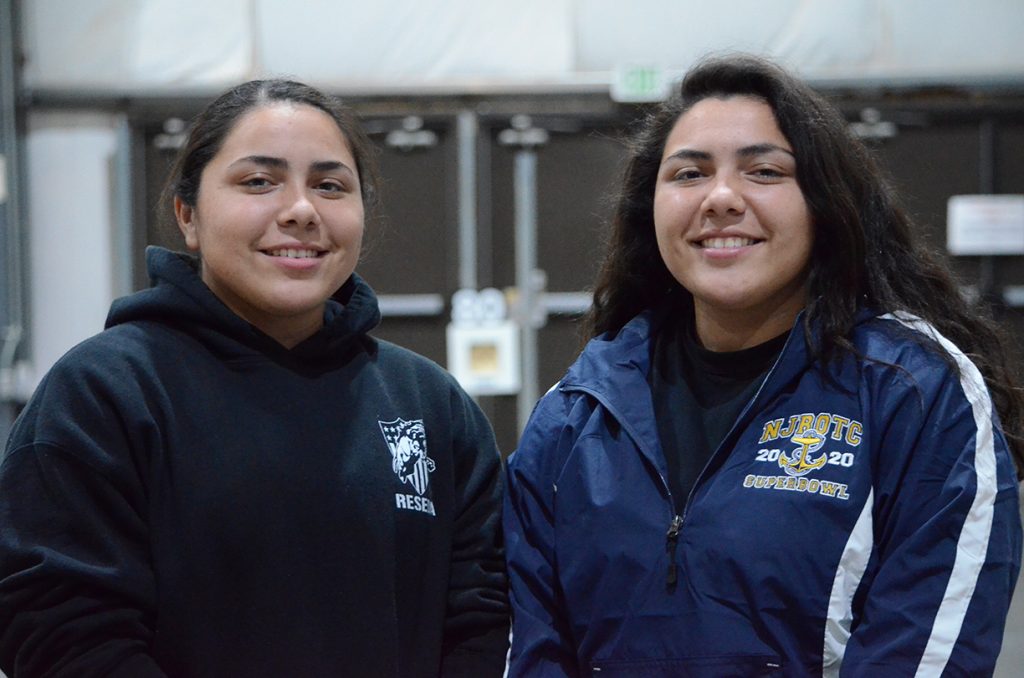 The Mendoza twins compete together on their Reseda Charter High School NJROTC rifle team. The two are constantly at each other’s side. If one finds something enjoyable, she’ll immediately tell the other, who will ultimately enjoy it too. At their Reseda Charter High School, they’re signed up for the same classes and even take part in the same involvements – that’s how they both became interested in joining their Navy Junior Reserve Officer Training Corps (JROTC) rifle team. It all started three years ago when they were searching for different scholastic activities to try out. They signed up for many drill teams in their ROTC unit, and despite having never been around any type of shooting, the girls decided together to give the rifle team a chance. “It was new to us,” said Cindy.  “It’s completely different from everything else, and it’s only you that’s doing it,” Cynthia said. “It’s your skill and nobody else’s.” 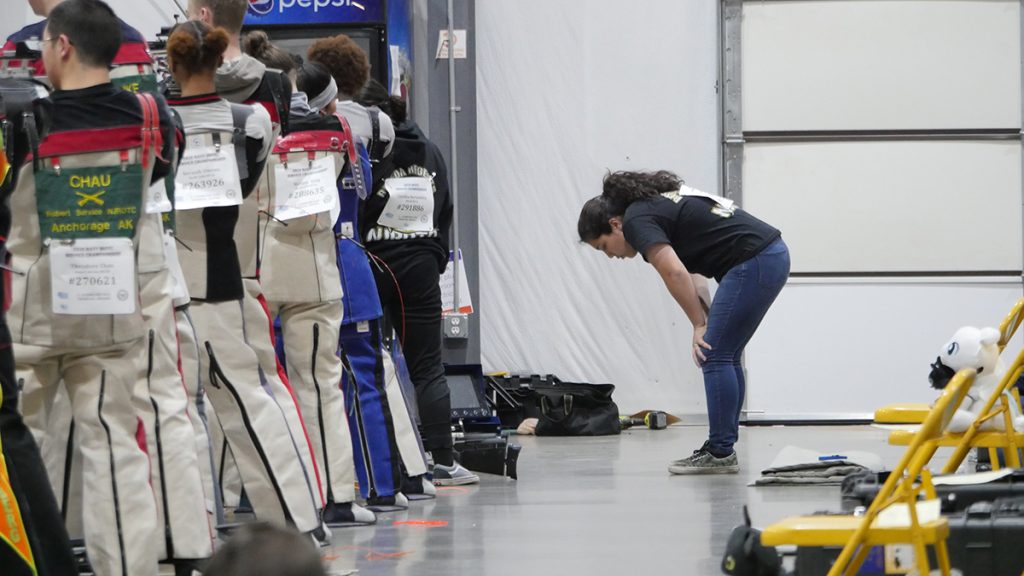 Though in competition, the sisters make sure to help each other on the firing line when trouble arises. Cindy confessed, “It’s kind of hard, but we work with each other – being on every single drill team, we have to practice kind of hard after school, and it kind of takes away from air rifle. So, it’s a struggle. We can make it work though.” “Shooting is a very hard sport. And a lot of people think that it’s not because all you’ve got to do is hold a rifle,” Cynthia went on. “Once they get into a position, they finally understand how hard it is, not just physically, but mentally.” “It’s all mental,” Cindy added. Cindy admits that she struggled with her own mindset when she first started on the team – showing up to practice, shooting a little and then taking a seat without really thinking much about what she was doing. But once she realized that she needed to put forth more focus into her performance, she found that she actually showed some flair for the sport. In fact, they both did. During the JROTC Air Rifle Service Championships in Arizona, conducted by the Civilian Marksmanship Program in February, both Cindy and Cynthia finished in the top 75 sporter athletes. Competing side-by-side, Cindy says that although she supports her sister, she’s also keeping a close eye on Cynthia’s scores during a match. “Between us, there’s always a competition,” Cindy said with a smile.  Though competing against each other, trying their best to accomplish their own individual successes, they equally continue to encourage one another – discussing their performances and keeping each other confident on the line.  “During it, if there’s a problem, we just tell each other to calm down. ‘It’s okay. It doesn’t matter.’ And just keep going,” Cynthia explained. 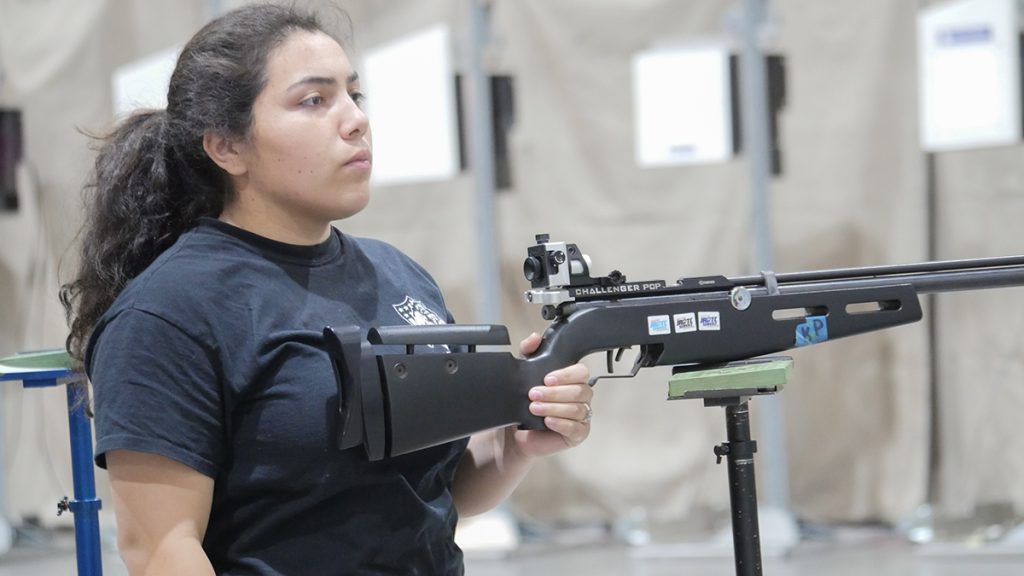 Cindy and her sister Cynthia will part ways once she goes off to the Navy and Cynthia joins the Marine Corps. Their devotion is resilient. Finishing each other’s sentences, displaying genuine admiration for the other, the girls talk about their future. They know that the closeness they’ve shared their entire lives will soon have to break by the only thing that could – distance.  Set to graduate in 2020, Cindy will soon be joining the Navy and Cynthia will be heading off to the Marine Corps. The girls are the first in their family to take the military route and are proud of it. Cynthia is unsure as to when she officially heads towards her new endeavor,  but she’s hoping to leave in July. She excitedly gushes about her eagerness to explore the world – anxious to get there as fast as she can. Cindy already has plans of leaving in September and is looking forward to relaxing during the summer and helping out her ROTC unit. For Cindy, unlike her sister, the thought of having to part from Cynthia and the rest of her family is best left a hazy thought until the time comes.  “I hate being away from family. I just don’t like it,” she said. The only time the girls have ever been separated was when Cynthia went away for a week to a leadership academy for the ROTC. During that time, it gave them an understanding that they won’t always be together.  As their respected futures draw near, the girls plan to slowly spend more and more time on their own to soften the transition. “At first it’s going to be sad. And you’re going to think about home – that’s natural,” Cindy said. “We’ll still think about each other and make sure we’re okay, keep in contact. And we’ll see each other from time to time.  “It’s not like we won’t see each other ever again,” she promised her sister. As twins, the girls are lucky enough to always carry a reminder of her sister each time she smiles. As they said, no matter what they do, they’ll always be a part of each other – it’s just natural. The post California Twin Sisters Team Up for Quality Time On the Firing Line appeared first on Civilian Marksmanship Program. This content originally appeared at text and was written by Christine Elder This content is syndicated and does not necessarily reflect the views or positions of The Liberal Gun Club