Also known as the Model 2, not to be confused with the Number 2 Army, this was the gun that introduced the .38 S&W cartridge. Which is, of course, .36 caliber… but we’re not going to worry about that. The 1st model was produced from 1876-1877. These became known as the ‘Baby Russian’ because the long ejector housing gave it a similar profile. [img]https://i2.wp.com/media.liveauctiongrou ... 4434_1.jpg[/img] The 2nd Model was produced from 1878-1891, and had a shorter ejector housing and other improvements. This model seems to be the one most commonly found these days, and it was the last model with a spur-trigger. The 3rd Model dispensed with this in favor of a conventional trigger and trigger guard, though a small batch of 3rd Models was made for the Mexican government with a spur trigger. Between all models around 223,000 of these handy little guns were made, so they were successful and quite popular. It’s not hard too see why; the auto-ejector made for fast reloads, and the svelte little gun is quite easy to hide. Operation is simple as well, and thanks to it’s safety notch on the hammer the gun could safely be carried with all five chambers loaded. It’s worth noting if you happen across one of these guns and the cylinder free-rotates when the hammer is down it’s not necessarily broken; it might simply be that the hammer is in the safety notch. The cylinder does fully lock when the hammer is in the fired position. A few years back I came to fancy S&W’s small top-breaks, but wasn’t much attracted to the single actions until I saw one an internet pal had put together. It had the barrel shortened to two inches, a nice, deep blue refinish and Mother of Pearl grips.

Magnumwheelman’s Model 2 snubby. Quite an attractive little gun, and he carries it regularly. Now, having a thing for snubbies and S&W top breaks this little gun ticked all the buttons for me, and I decided if opportunity presented I would do one up for myself. Well opportunity presented itself last year; a friend spotted a 2nd Model in his local gun store at an excellent price, and I was able to pick it up.

Rather sad cosmetics, but no way to argue with the price! Not in excellent cosmetic shape, but the bore and chambers were good, and the cylinder exhibits no endplay and locks up dead tight. The trigger is a bit stiff, but nicely crisp. The barrel slugged dead-on at .361″, and the chamber throats were likewise an exact .361″. Having acquired a suitable gun I was ready to get started. Now at this point some might question my decision to modify an antique like this. Fair enough, but bear in mind these are not currently much sought after by the collector market, and even then they are mainly interested in pristine examples. There are plenty of guns like this one in circulation, and Smith & Wesson themselves frequently modified these guns at a customers request. First things first- I shortened the barrel to 1-5/8″, the same as on my .38 Safety Hammerless. The looks of this length just work for me, and besides I am already familiar with the ballistics of this barrel-length. I crowned the barrel, then made a new front sight and silver-soldered it in place. I made the sight from bronze because in most lighting conditions it’s quite visible. Once the barrel was shortened I made a new set of grips to replace the original Gutta Percha grips (which I kept.) I had some moose antler on-hand thanks to a buddy of mine from Alaska, and it made a nice set. I took the gun to the range to try out, and it shot very well, and right to the point of aim. 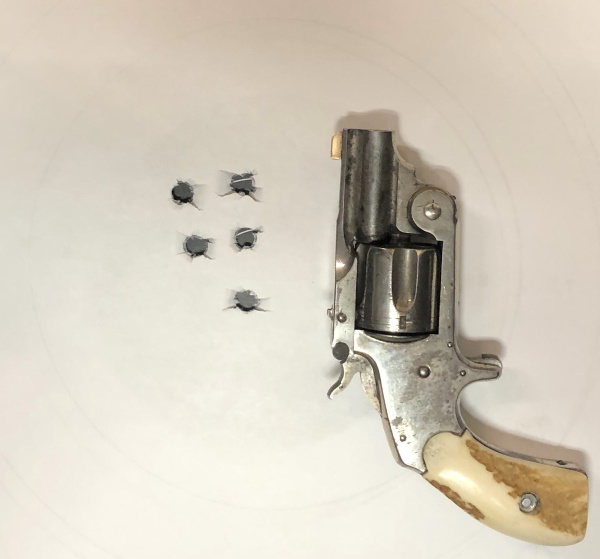 Quite adequate at seven yards, and the gun is a pleasure to shoot! The next order of business was to dispose of the nasty old nickel. I’ve always done this , slowly and painstakingly, with abrasives, and was determined to never do so again. I was advised that Hoppe’s #9 is a copper solvent, and got a large bottle. I disassembled the gun, then put the barrel, cylinder frame and sideplate in to soak… and soak… and soak.

No joy. the Hoppe’s had zero effect on the nickel plating. In the end I gave up. The reason this often works on nickel guns is that it is common practice to plate the gun with copper, then plate over the copper with nickel. S&W apparently didn’t have an under-layer of copper for the Hoppe’s to attack, so it had no effect. Bugger. On the bright side I have a life-time supply of Hoppe’s #9. I set the project aside for a time, thinking at some point I would order some nickel stripper from Brownell’s, but somehow that never happened. Then the other week, with plenty of time on my hands, I caved. I detail-stripped the gun, then carefully sanded all the nickel off, taking special care to preserve the original lines of the gun. I sanded with the sideplate in place to avoid rolling it’s edges, which looks horrible when the gun is refinished. Finally I carefully sanded the gun to 280-grit, then rust blued it using mark Lee’s Instant Rust Blue. Reassembling the gun involved holding the trigger and trigger-plate against spring tension, and naturally as I was trying to secure the plate the springs sprung and the lock-spring vanished into the nether realm, probably the same ones that socks go to out of the dryer… Bugger. Rather than searching the internet for another spring I simply flattened some music-wire and made a replacement. This time I got the gun reassembled without mishap. I’ll let you judge the results for yourself, but I am excessively pleased with how it has come out!

Shown with a 3″ K-frame for size comparison By it’s serial number this gun was made in the early to mid 1880s, and nearly 140 years later it’s still going to be used for it’s original purpose. I don’t plan on EDCing this gun, but it is admirably suited to situations where extra-discreet carry is appropriate, and it may be employed as a back-up if I feel the need. Michael Tinker Pearce, 27 march 2020 This content originally appeared at text and was written by tinker1066 This content is syndicated and does not necessarily reflect the views or positions of The Liberal Gun Club

Very nice, I love seeing old gun restored. And this was such a nice distraction from all the news of the day. Thank you.
All religions united with government are more or less inimical to liberty. All, separated from government, are compatible with liberty.-Henry Clay
Both oligarch and tyrant mistrust the people, and therefore deprive them of their arms.—Aristotle
Top

lovely. wish i had your skills.
Top

Turn on channel six, the President comes on the news,
Says, "I get no satisfaction, that's why I sing the blues."
Top
Post Reply
5 posts • Page 1 of 1