I took my new toy out the range today to give it a try. It rained yesterday, so the field was muddy, but the sun was out and the temperature was pleasant with a nice light breeze to keep me cool. I set up at 25 yards and commenced to firing.

But right off the bat something seemed amiss. When I pulled the trigger I heard the bolt clack, but I didn't hear any retort from the bullet going off. I was worried that I had a misfire until I saw the spent cartridge next to my gun. This rifle is just silent! No need for a suppressor with it. I even took off my ear muffs for a couple of shots and all I could hear was the metallic clacking of the bolt sliding back and forth. It made for quite a surreal experience because I've never shot such a quiet gun before.

Continuing on I could see that my shots were coming in very low. This didn't really surprise me because it wasn't clear to me how I was supposed to align the sights. The rear sight was very low profile and I started lining that up with the base of the front sight to get my shots into the area I was aiming. Then, after about 30 shots I realized what I was doing wrong: the rear sight was in it's folded down position! After putting up the rear sight things made much more sense.

I shot about 100 rounds into my first target to get used to the gun, and then set up a second one for a slightly more serious test. Here's the second target. 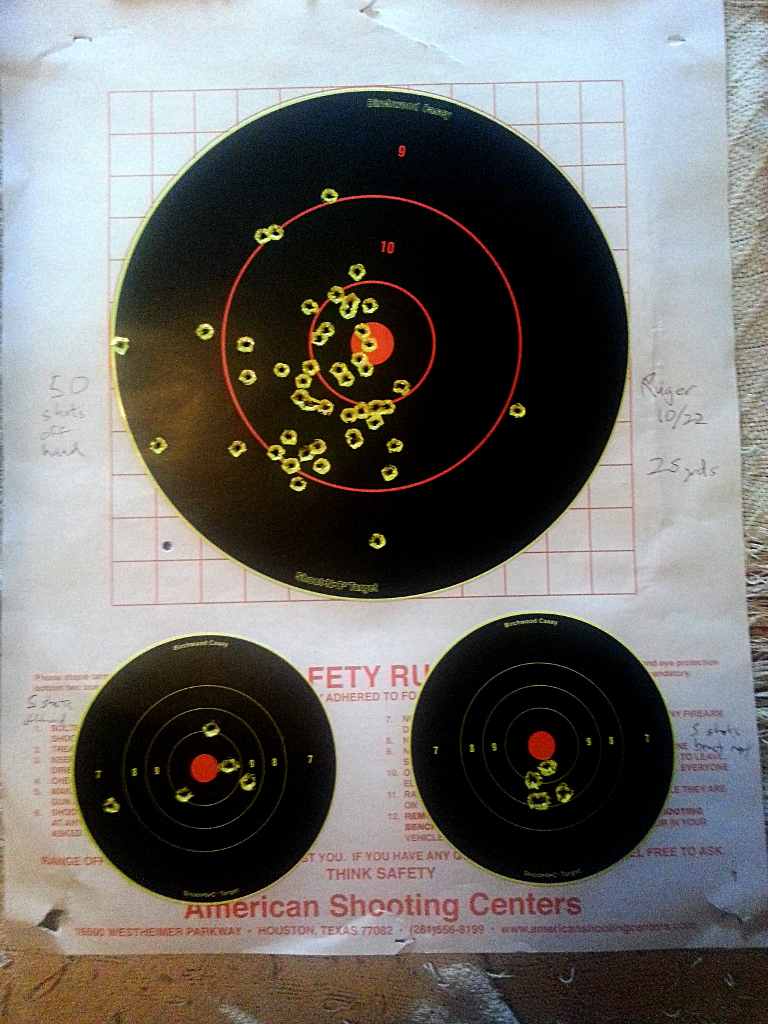 First I shot five rounds at the lower right small target with the rifle resting on my range bag. It was hard to see the front sight against the black target, so my aim was not consistent from shot to shot, but it still made a 1 inch group. Next time I'm out I'll get a light colored target for more contrast with the sights and see if I can do better. From reading online, this gun should be able to do 1.5-2 moa out of the box,

Next I shot another 5 rounds off hand into the lower left target. I feel quite happy that I got all shots in the black, because I've never fired a rifle off hand before. I've thought about trying it with my other rifles, but I never did because they are much heavier than the 10/22. This rifle is easy to hold.

Finally, I put 50 shots into the large target, off hand. I tend to come up low and left, but I don't know if the sights are off, or I just need to practice more. I'm sure I need more practice, so I won't be fiddling with the sights just yet.

All in all it was a pleasant day!
88+ recreational uses of firearms
1 defensive use
0 people injured
0 people killed
Top

What ammo did you use?
Top

Sweet! I miss my 10/22. Don't need another one, but if a takedown crosses my path at the right time, I may have to get it.

What a luscious and delectable range report. Such human. Most excellent. My son has a 10/22, and I know what you're saying. Now that you have the definitive pewpewpew gun, you have to arrange a trip out to some safe and unsupervised wide open space. And you take a couple of soup cans. Or beer cans, what not. One by one you chase them around until they're lace. Pack out your cans and brass. :-) Shooting stuff is fun.

I went to American Shooting Centers on the west side.


danhue wrote: What ammo did you use?

I went to American Shooting Centers on the west side.


danhue wrote: What ammo did you use?

Thanks for a great report! Glad you made such progress with the rifle. You should be encouraged by a one inch group at 25 yards. Shooting for group size off a bag is not trivial and I bet you can get 2 MOA pretty easily. How’s the trigger?

As many have said, CCI SV is a good match for the 10/22. Quiet, clean, and accurate. Reasonably priced too.

You can quiet it down a bit more of you replace the steel bolt buffer with a nylon or rubber one.

The trigger is fine I guess, or at least I didn't notice it when firing, so it certainly didn't feel wrong to me. I just put a scale on it and it came in a 6 lbs.

As for making the gun even quieter, I think if I did that I'd have myself a good assassination weapon, LOL!
88+ recreational uses of firearms
1 defensive use
0 people injured
0 people killed
Top

Great report, I enjoy reading how other people work things out for themselves. It gives me hope that I am not the only one out there that struggles a little.

By the way, you really have a nice collection there. A little bit of everything.
Never confuse knowledge with intelligence.
Top

I love shooting .22LR. It's quiet and rifle or handgun a great way to practice the basics and warmup for the larger calibers.

Thank you! I'm still working on it. Some people emphasize just one or two calibers so they don't have to buy lots of different kinds of ammo, but I like having a little of everything. That way, when I'm struggling to survive in the post-(nuclear war/ zombie apocalypse / eco catastrophe) world I'll be able to use any ammo that I come across.

A six pound trigger is pretty good for general use. You wouldn’t want to go to much lighter for field work. If you really wanted to tune it up for target shooting, you might want to reduce it to about 2-3 pounds. There are a number of ways to do this most of which involve spending money. So just enjoy it as it is now and if you decide to use it more for target there are a lot of possibilities for reducing the weight and grittiness.

Above all, have fun.

If video games have taught us anything, you can carry as many guns as you want. It's the ammo that's heavy. 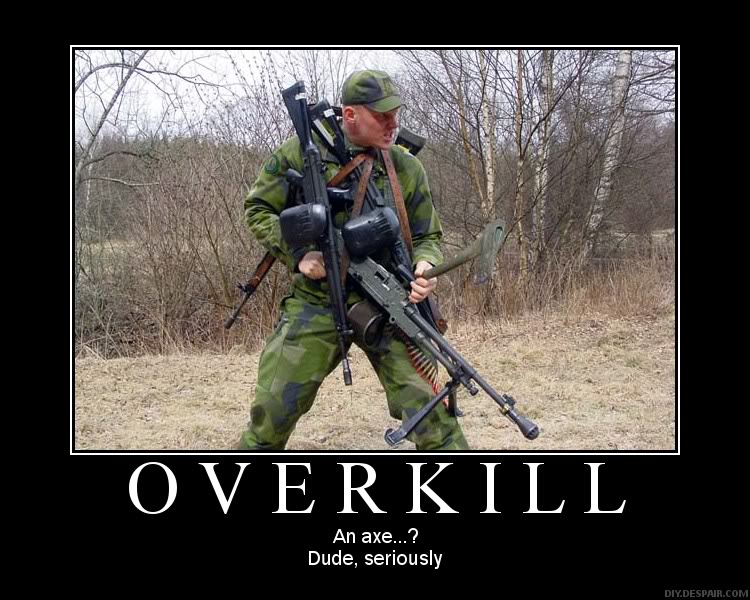 Congrats Eris! Enjoy getting to know your new rifle skillz!

As for the assortment, there's an app...er tool for that! It really is getting to the point where I need that wheel barrow. Apparently guns are like Lays potato chips: you can't have just one.
88+ recreational uses of firearms
1 defensive use
0 people injured
0 people killed
Top

However, not enough ammo to have any real fun.

Eris, soon you'll be hitting things without those pesky little things called sights. They're just a crutch you know. Useful until you get to shooting as good as everyone does in Hollywood.
"It is better to be violent, if there is violence in our hearts, than to put on the cloak of non-violence to cover impotence. There is hope for a violent man to become non-violent. There is no such hope for the impotent." -Gandhi
Top

However, not enough ammo to have any real fun.

I'm only killing paper and my self-esteem.