1 by SmokeFan
On kids and guns. Read it here!
Anything unattempted remains impossible.

2 by begemot
Thanks, SmokeFan. Good post. Some urban liberals I know react to every photo of a child target shooting as if it's a Congolese child soldier. Good reminder that in a lot of the country "gun culture" is just culture, without political baggage.

3 by spara
My daughter shooting her first match a couple of weekends ago. I started her with an airsoft in the backyard and got her used to handling a pistol and safely loading and unloading and worked on front sight focus. She started shooting 9mm but we decided to stick to small bore for now because of 4H. She's also pretty handy with a rifle. 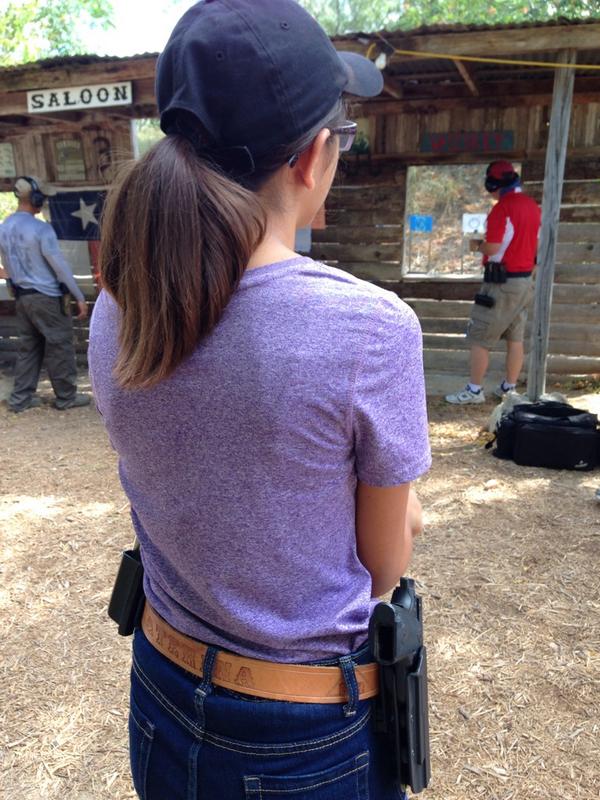 4 by rolandson
About the time between adolescence and young adulthood, that time when a parent's input is, more often than not, a function of threat versus reward, I found that shooting provided an avenue that held my young son's interst...and thus opened doors that might have been terribly difficult otherwise.

He now shoots with greater precision than I quite regularly yet continues to accept the benefit of my experience in this world that we have largely explored together.

Daughter had no interest...until she met a young Marine. Suddenly firearms were not so evil. Now a day at the range might include both children and a young non-comm.

It is simply inaccurate to presume that being liberal precludes this most fundemental of American pastimes. Of this small collection not one has voted conservative...ever. The youngest has voted twice.
good tea, nice house

5 by bigstones
Guns were an anathema to my family. I first shot a rifle when I was 9 or 10 at summer camp. It was love at first sight or should I say first open sights. I loved everything about shooting. I loved the look of the two shiny .22 long rifle cartridges the instructor placed in my hand. I liked lining up the open sights the front bead in the v-notch and on the target downrange. I liked the crack the bullet made as it broke the sound barrier (barely). I liked working the bolt even though it was right handed and I shot left handed. I liked the smell of the residue of the burned powder. I loved seeing the holes appear in the target as if by magic and trying to hit the bullseye dead center. Almost 60 years later, I still love it, especially the sweet smell of the Eley primed .22s.

I have taken each of my children and the grandchildren who live close shooting except for the little one who is five. The last time I saw him he asked me "Grandpa, when I get bigger will you teach me to shoot a gun." I told him "You bet I will."
Fukshot
Fukshot

6 by Fukshot
I don't talk about this stuff here much, but I have a different kind of family.

I have a maternal relationship with a younger trans woman. Not a complicated kinky sexytimes relationship, I have those with other people. This is actually a fairly old-fashioned traditional relationship among our people. We have been thrown out of our families of origin so consistently for so long that we have cultural traditions built around that fact. That happens less than it once did, but it still happens a good deal. Too much.

She mentioned that she would love to go shooting. She had some very limited experience with guns as a child; a little rifle shooting with family members who never really treated her like family should. Many adult trans women have complex relationships with many things considered masculine and especially things that are often thrust on them, in their youth, with the intention of "making men of them". For some this includes shooting guns.

I took my adopted kid and a couple of other trans women her age shooting together. We spent a lovely morning shooting clay at Los Altos. They laughed and shot and hit some clay and cheered each other as they all learned. We, here, all know the joy of learning to shoot. It was amazing to see these women sharing that and also knowing some were taking ownership of something that had once (to a greater or lesser extent) owned them.

Taking the kids to shoot is an experience that crosses many cultural divides. I'm very lucky to get to do it.

I had 'a different kind of family' too. 80 years ago it wasn't 'different' - more like Northern New England hillfarm traditional. Certainly nonstandard nowadays though. All these differences and yet we are all here, calmly (relatively:)) shooting the breeze about shooting and guns and maybe (I haven't been here long) the best way to prepare Gila Monster.
The universe - is what it is.

Roasted, and served with a nice Shiraz.
Anything unattempted remains impossible.

Roasted, and served with a nice Shiraz.

Taste like roast chicken.
Facts do not cease to exist because they are ignored.-Huxley
The illegal we do immediately; the unconstitutional takes a little longer-Kissinger
Reasoning will never make a Man correct an ill Opinion, which by Reasoning he never acquired.-Swift
Fukshot
Fukshot

It differed in the details among families, but was based on two principles: absolute parental authority, and sharing the work. Ma was the boss of the house, pa was the boss of the farm. Kids started learning the chores at about 6 y.o. By 10 y.o. the boys knew the farm work, and performed it within the limits of their physical strength. The girls knew the household work before that age, except for cooking (the stovetop was too high) and the fine points of food preservation, and usually had charge of the chickens and the kitchen garden too. Summer school vacation was no vacation except from schoolwork. There was somehow time for play, but then foraging (for berries, wild leeks etc) and hunting for meat were considered forms of recreation.

I was a latecomer, and missed most of that; the family moved into town in the spring of the summer I was born. I have always felt somehow deprived.
Last edited by hillman on Wed Sep 03, 2014 1:53 pm, edited 1 time in total.
The universe - is what it is.

12 by Catalyst
Great read thanks!

14 by Ultravox
Nice blog post. I grew up summering on 80 acres of land West of Glacier National Park and one of the things I was tasked to do was shoot the ground squirrels. "So the horses don't step in the holes" said my grandmother. Never mind that we didn't have horses out there.

So I shot the old single shot bolt action .22 rifle starting at a young age.

Now I take my kids, nieces, and nephews out and show them how. With the same rifle. And it's just as accurate.
-+-+-+-+
"Nothing exists except atoms and empty space. Everything else is just opinion." -Democritus
-+-+-+-+-
Come check out my custom 1911 grips and other wooden items at my Etsy store.

My uncle took me for my first shooting lesson...when I was 40!

I have a Rascal in the safe for when the kids seem interested.

Saturday when I went shooting, I went with my SIL and - we'll call him Fred. Fred has been the SIL's friend since they were 8, moved away from our little town and lives in large liberal Ann Arbor, home of the University of Michigan and left wing causes from Pug Dog Rescue to the International Communist Liberation Workers Party and Death to Capitalist Pigs Reading Group. Neat place, I love it. In any event, as the SIL introduced me to Fred, I was clear about one thing, Fred is gay.

It's mostly in attitude, and in 'accent'. Here was a kid who spent his days inside gay culture, and was trying to shift gears and was coming close, but not quite making it yet. He has a lot of scars this one, clearly Daddy was an asshole, one of those men who is overbearing and has no idea how to be intimate comfortably with a child if the child is male. I have two Mike's in my life with a lot of the same scars, one was a cousin, and my uncle was an orphan with no parental model and believed tough was all you needed to get through. SO for Cousin Mike, tough started when he was still in diapers. The other Mike was a friend of my youngest daughter whose family threw him out, and he lived in my basement for 10 months and cooked meals for us among other things. Both are dead, being gay is fatal sometimes.

Fred's dad shared with his son a love of guns, and Fred has that love too. Fred is prickly, it's clear he's had to deal with overbearing personalities and he preemptively assertive on some points. I think I was reading him so well I could forgive him nearly anything. I tried to make him comfortable, and as the day progressed he lost the gay accent but also seems relaxed and comfortable. We did have a lot of banter and fun things to shoot.

Fred is keeping his gayness from my SIL, which is fine and I will respect that. The SIL is too close to Fred to see an issue, not that my SIL can deal with emotions very well, he is a work in progress between my daughter his wife and me. But it's sad to see Fred at least in one part of his life still in the closet. I'm rooting for him.
When only cops have guns, it's called a police state.
I carry due to toxic masculinity.......just other people's.

17 by senorgrand
Antiquus: something is stuck in my eye...

Re: New SARS type virus spreading in China
My wife worked for over two decades as a researche
sikacz, Fri Jun 25, 2021 9:04 am

Re: Good Samaritan allegedly shot by LEO in Colora
Then there was the WalMart good Samaritan who took
Wino, Fri Jun 25, 2021 9:01 am