If you're stuck in a snowstorm, a pub is a good place to be.

If you're stuck in a snowstorm, a pub is a good place to be.

61 staff, guests and musicians cut off by 3ft of snow at Britain's highest [elevation] pub, the Tan Hill Inn [North Yorkshire], since Friday...Many guests have been sleeping on makeshift beds on the floor but some admit they 'don't want to leave'...Parts of UK blanketed by snow as Storm Arwen c...100mph winds have wreaked havoc, damaged buildings and caused disruption on roads and railways

More than 60 people cut off by 3ft of snow at Britain's highest pub spent a third night there with bonhomie fuelled by live music from an Oasis tribute band and a load of food and booze ordered by the landlord because a Queen covers act is also due to play there this weekend.

Becky Longthorp, 36, said that they have been passing the time with drinking games and making snowmen at the remote Tan Hill Inn in the Yorkshire Dales, where the manager banned alcohol until after 3pm for the health of those stuck there.


It is not yet clear if punters had to pay for all their pints and meals, but there was a whip-round raising £300 in cash for the staff as people began to head home.

She said: 'To be honest, I think the main worry was if the beer ran out really. It's like "I'm a celebrity", but at the Tan Hill Inn pub. In the night, just after the Oasis gig, I went to check on the tent and it was flattened - it was ripped into shreds', spending three nights on the floor of the pub after that.

Ms Longthorp and Gary Bimpson, 42, from Hull, were finally free to go today with a snow plough and team of workers clearing the route and digging out the cars after Northern Power engineers make safe the fallen cables that also blocked the road out.

The lock-in came to an end today after 61 staff, guests and musicians including Noasis - the UK's top Oasis covers band - were left trapped in the 17th-century hotel on Friday night following heavy snowfall during Storm Arwen. Many guests have been sleeping on makeshift beds and mattresses on the floor, but they have been treated to movies on a projector screen, a quiz night and a buffet meal - with some admitting they 'don't want to leave'.

The pub's manager Nicola Townsend, 51, admitted she was pleased that it was a mild-mannered tribute band ,that was snowed in with the because the atmosphere would not be as pleasant - and admitted that after three nights of Oasis covers she would have loved to hear some Blur. 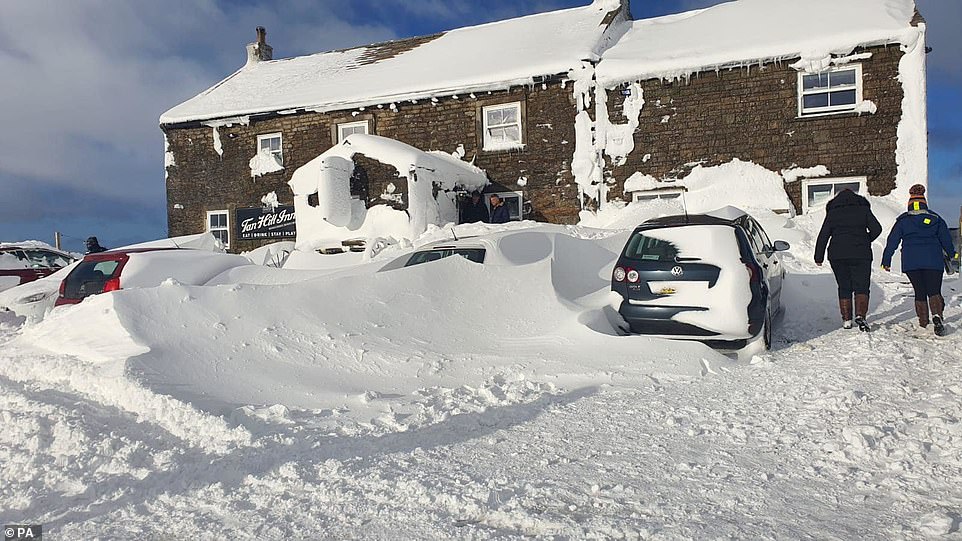 Punter is slang for customers.
"Everyone is entitled to their own opinion, but not their own facts." - Daniel Patrick Moynihan

2 by sikacz
If I had to pay for every drink it wouldn’t be a great place to be stuck. Pure torture, to see and not be able to have. Now, if it was on the house, great! LoL.

"Resistance is futile. You will be assimilated!" Loquacious of many. Texas Chapter Chief Cat Herder.

3 by chgowiz
It didn't seem to work out in "Shawn of the Dead", although that was an ordinary pub in the middle of town...

4 by Crow
Isn't this the plot of one of those Made for Netflix Xmas movies?
Crow
Minute Of Average

5 by highdesert
It reminded me a bit of a 1949 British comedy, "Whisky Galore!" also called "A Tight Little Island." It's about a ship that runs aground on a small Scottish island with 50,000 cases of whisky on board. The islanders salvage much of it and stash it everywhere to hide it from the revenue men and the Home Guard (National Guard). It's very funny.

By the way if you ever read the books or saw the series "All Creatures Great and Small", it was set in the Yorkshire Dales where this pub is located. James Herriot, in real life Alfred Wight practiced in that area.
"Everyone is entitled to their own opinion, but not their own facts." - Daniel Patrick Moynihan
FrontSight

6 by FrontSight
Give in another week and it will turn into a murder mystery.
“I think there’s a right-wing conspiracy to promote the idea of a left-wing conspiracy”
6 posts
Post Reply

Re: Wisconsin Republicans pass bill allowing some
Yup and Evers will veto those bills. Republicans
highdesert, Tue Jan 25, 2022 1:16 am