It’s a dangerous thing to do, but I was browsing the gun deals sub Reddit. I’ve always made the mistake of missing really good surplus drops, so generally if it’s $2-300 I jump on it. I missed out on Nagant revolvers at $100 & and CZ 83 at $189. They get snatched up With in Hours, & then you can only
Find them for $200 more on auction site unless you get lucky with another surplus drop. These were bought up within a day for $225 shipped.

The pistol was made In the former Yugoslavia by the company Zastava which still exists today in Serbia. I watched a few reviews on you tube and pulled the trigger.I didn’t have any .32 ACP so I decided to get on reloading it (more on that later.)

The pistol arrived covered in crusty cosmolene - inside & out. I could barely get the slide off it was so encrusted. Once I was able to get it apart, I began scrubbing it in dawn and soapy water for quite some time. I disassembled the 2 supplied mags and did the same. I got most of the Cosmolene off then gave it a soak in CLP break free. Cleaned all that off.

I had to source components & dies from several different sources. They all arrived before the pistol did, which was less than a week. Loading the .32 ACP is a tedious process Becuase the charge is so small & the cases are difficult to manipulate.

(I tried to seat them at the depth The Lyman loading manual specified) but it was clearly not deep enough. Set depth in the manual was .988 and it was setting them almost all canted and wonky. I knew they were going to have problems just looking at them. And sure enough I did. I took it out for a test fire today and fired 2 rounds before I had a misfeed- but that was on me as the bullets were all set crookedly.

I went out and bought factory rounds (at $30 box, yikes) and they were visibly deeper - came home and they were set to .985. I will reset them, and run them through the die again set to .985. I have always had hard time loading FMJ semi auto rounds with out a visible cannelure. In fact, I use almost all cast bullets either pre. Cast or home cast to good effect. The only FMJs I load are 5.56 & those so in fact have a cannelure. Most pistol JHPs have one as well. This is why I prefer cast bullets as there is usually a crimp line so it removes the guess work.

The 2 rounds I did fire at about 7 yards we dead on with the minimal Sights.

The pistol came with a European style flap holster that was completely dried out - and not the type of holster I usually prefer - so I soaked it in neatsfoot oil. If I’m going to open carry a pistol with a flap holster In The out doors - it’s not going to be this one! Then, I set out making a new one - I aimed for one that would work either Strong side or cross draw. IfCertainly a holster I slammed together in a few hours & it’s far below my best effort. 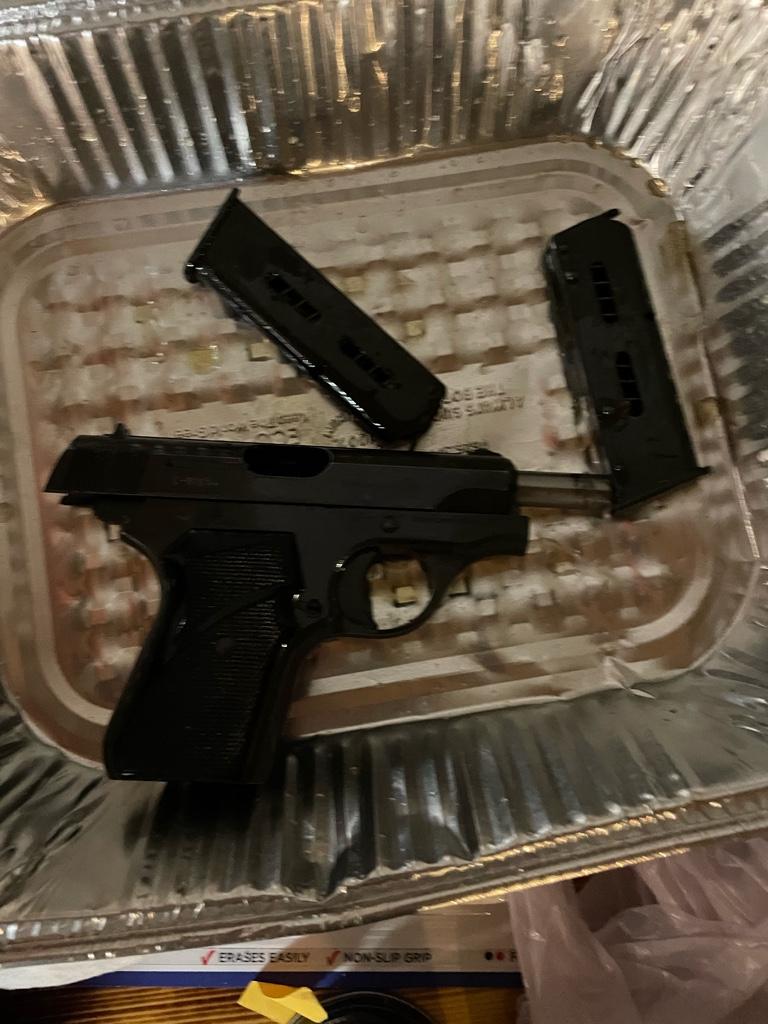 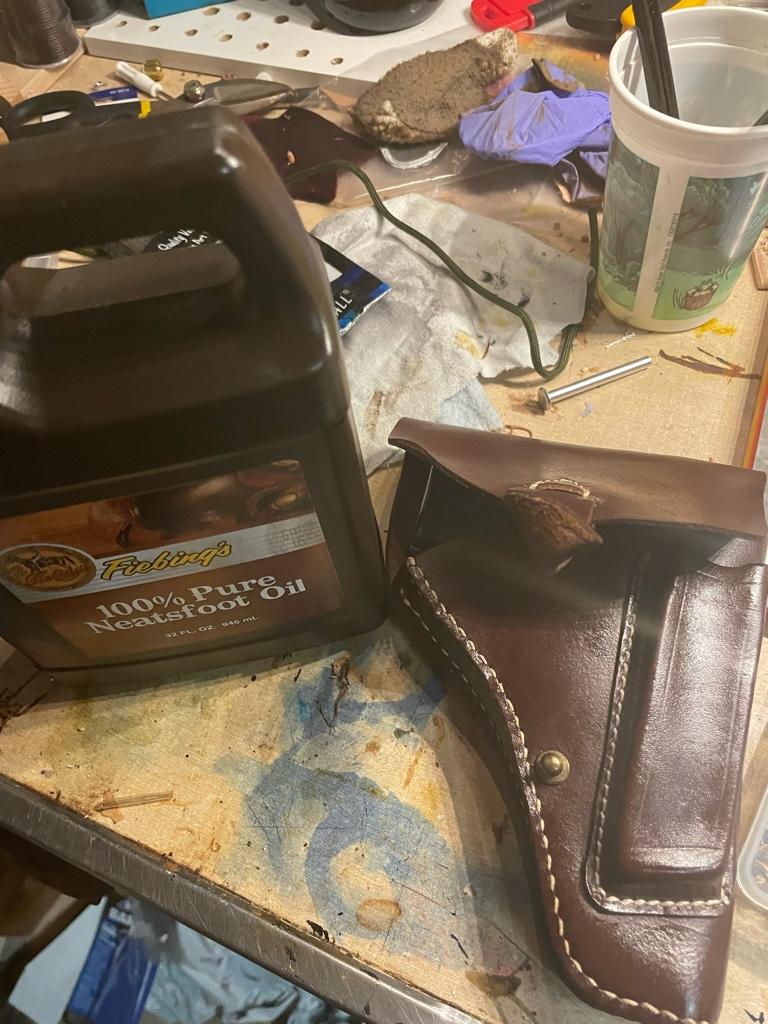 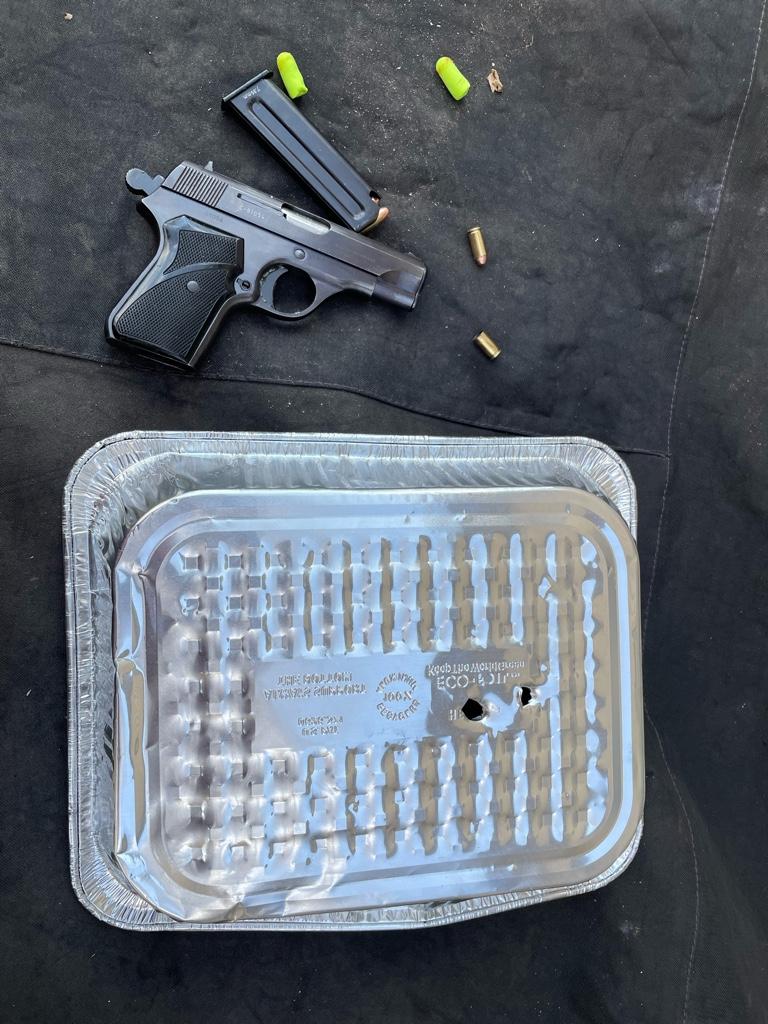 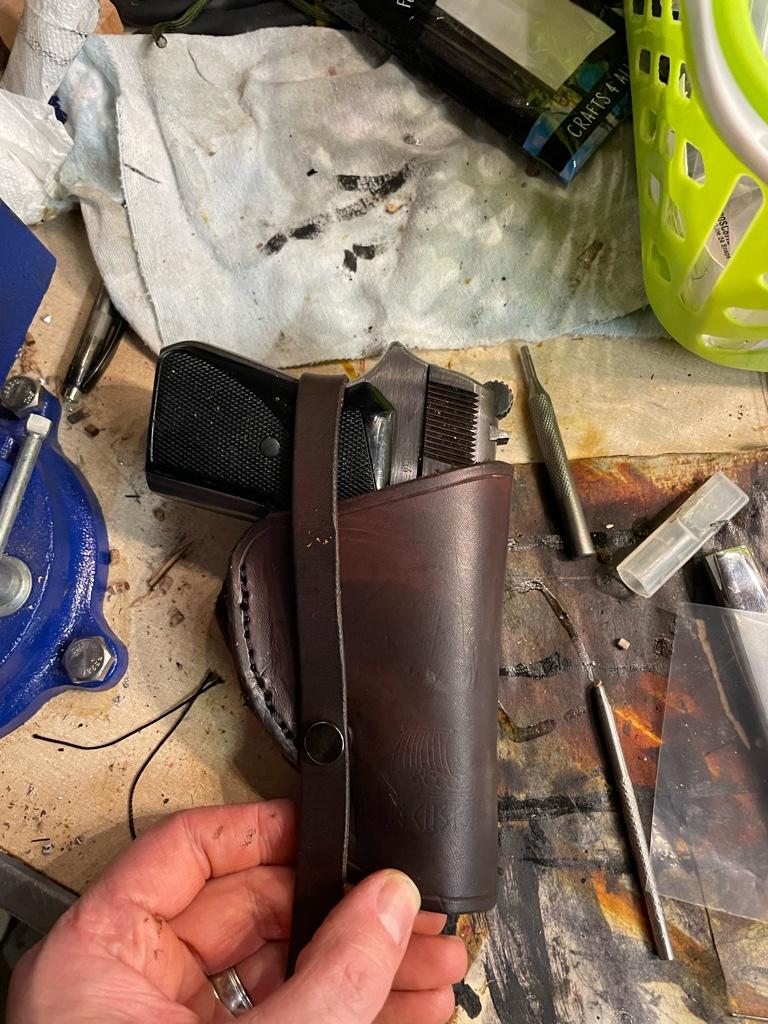 2 by tonguengroover
That gun is a beauty.
Pence makes no sense

3 by INVICTVS138
Took it out for a few mag on my property range. I also function tested my new, 1911 threaded barrel fitted by a gunsmith last week.

It honestly shoots great, for a small pistol. Way better than my Keltec .380. It’s got enough heft to make the .32 seem like a .22. The sights are just big enough to be effective. I definitely think it was a good buy. 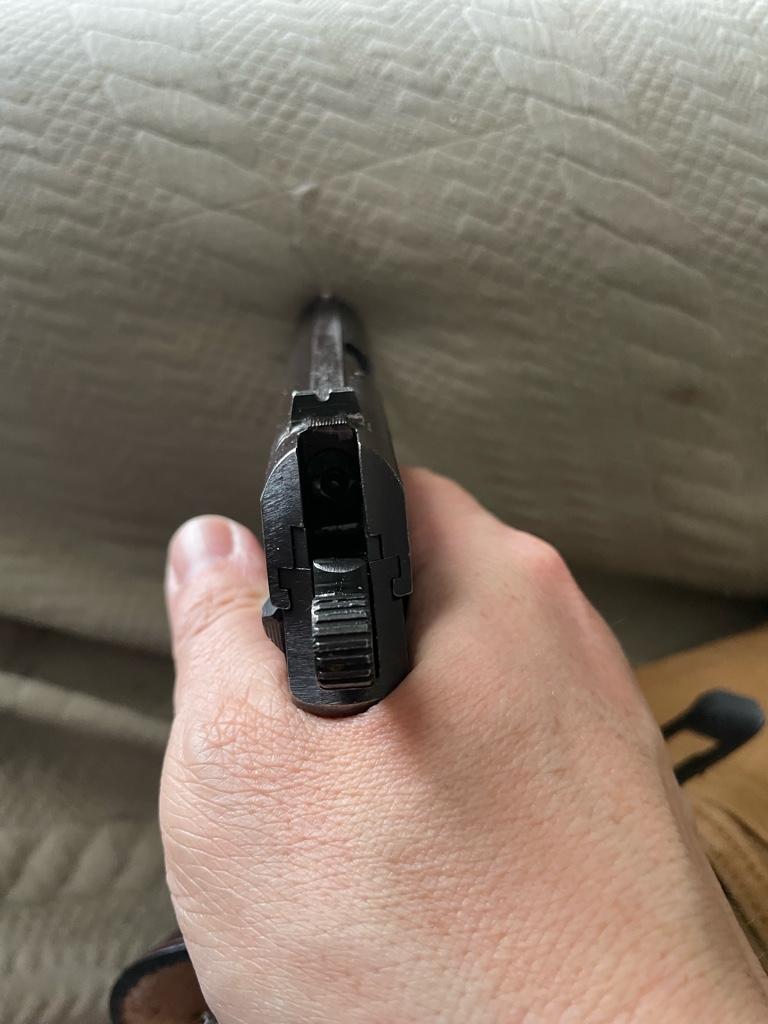 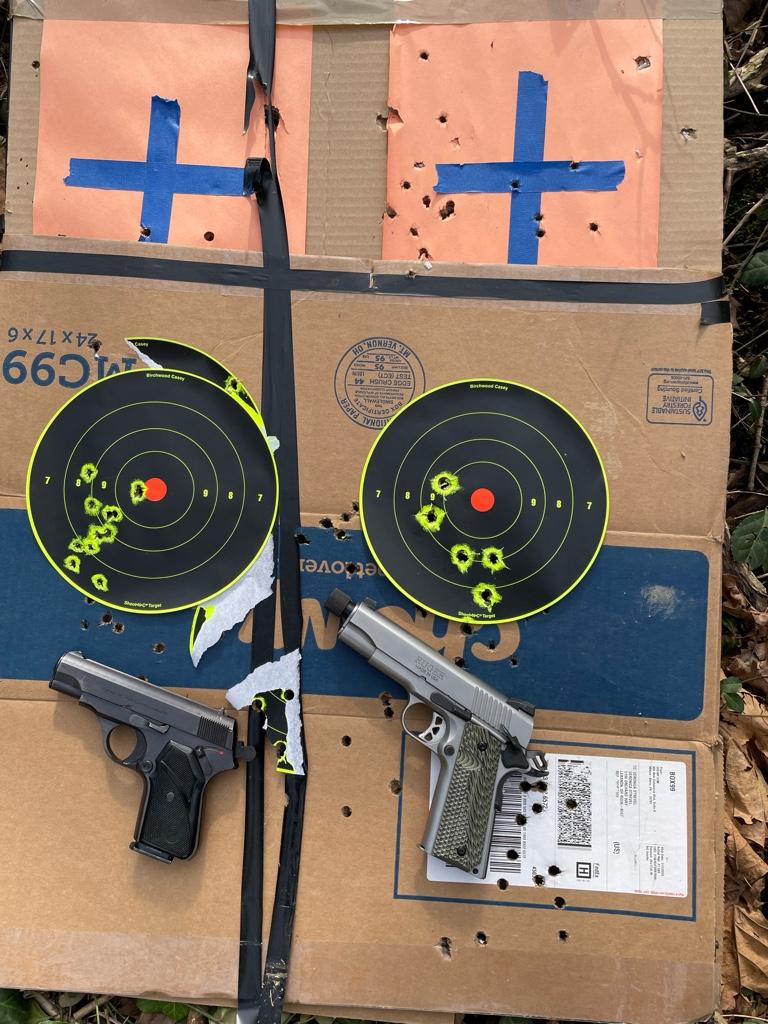 The 1911 I shot at about 10 yrds off-hand & the Zastava off hand at about 5yrds. I had one FTF on the 1911, but I’m chaulking it up to the semi-wad-cutter hand loads. (Semi autos are finicky with SWCs) I’m going to try again with LRN or FMJ.

I had a hard time finding my spent brass Because of all the leaves down there so that’s a disappointment. 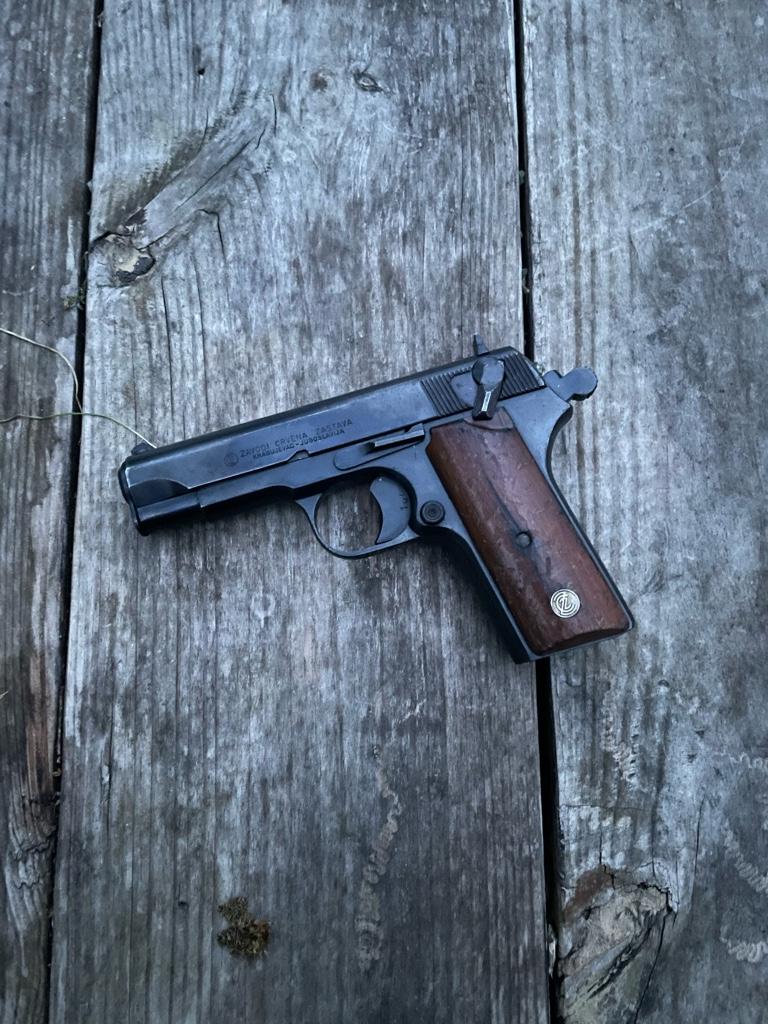 Picked this up off the same surplus site - red star surplus. Really fast shipping. A Zastava m-88a 9mm Para. Basically, the big brother of the m-70 .32, (based on tokarev) and the obvious benefit of 9mm ammo.

It didn’t come with mags but I was able to score 2 on eBay, at a reasonable price. I probably won’t get to shoot it until next week as I am traveling for work this week. My bet is weighing In at about 22 oz. It going to shoot roughly like a S&W shield - a bit snappy but not unbearably so. 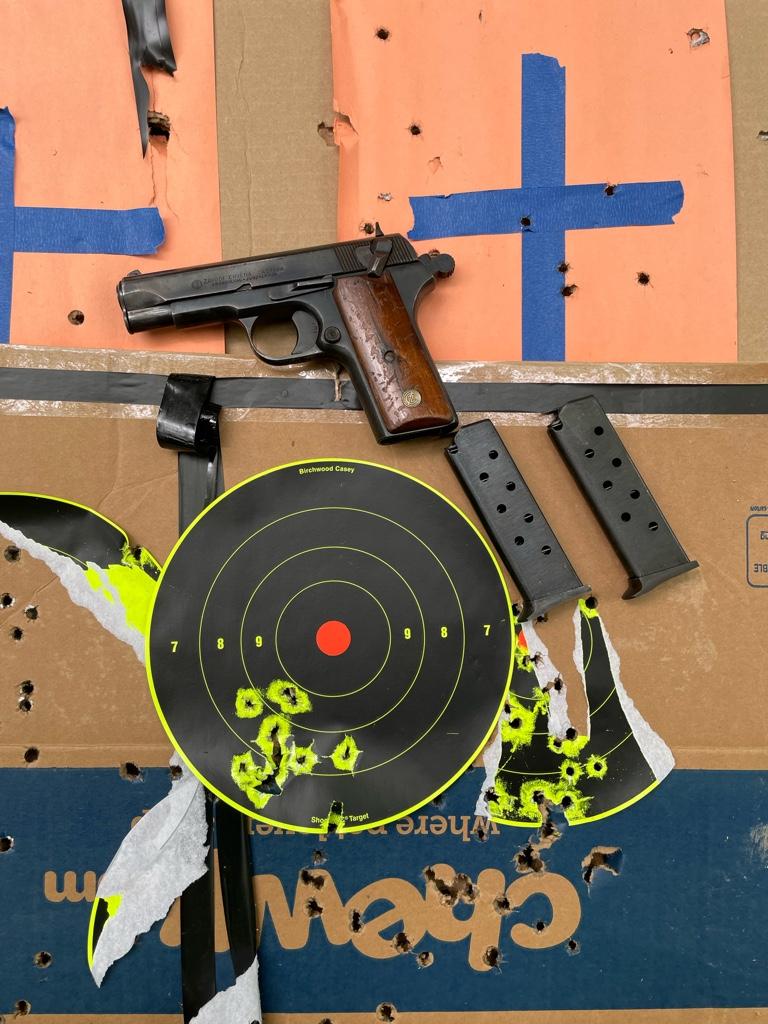 Finally got enough 9mm para loaded up to take the m-88a out to my backyard test range.

This is shooting prone from 15 yards. Trigger is stiff! I’m not sure if I need to drift the rear sight over a bit, or it was just the stiff trigger, that was pulling my group left and low? Group is decently tight though. I’m wondering if it’s sighted out farther (25-50m)due to it’s eastern bloc military heritage? Sight picture looks good & crisp though.

I finished a reloading project last night - so these were medium 115 gr LRN loads. Recoil was brisk into the web of the hand. Given, that this is a tokerev based pistol frame design the recoil was direct into the web of my hand & I bet any “modern” 9mm would feel better (with the same load) due to the more ergonomic design and poly frame.