I'm struggling to explain why a Fox News host would say to the American people, "they're trying to take down the white culture!"

But first, let me back up.

Democracies don't turn into fascist oligarchies by being invaded or losing wars. It always happens from within, and is always driven by an alliance between demagogic, populist politicians and some of the very wealthiest people in society.

Step one for these right wing politicians and the morbidly rich who support them is to pit one group of people within the nation against others: Marginalize and demonize minorities, deny them access to the levers of democratic power while openly attacking them for trying to usurp the privileges and prerequisites of the majority.

It's played out this way in every democratic country that has fallen to tyranny. It's how it happened in the 1930s in Italy, Germany, Japan and Spain, and today in Hungary, Poland, Egypt, Russia, The Philippines, and Turkey, among others.

And now Republicans and the oligarchs aligned with them are trying to pull it off here in the United States.

As German industrialist Fritz Thyssen writes in his apologetic book I Paid Hitler, he pressured German President von Hindenburg to appoint Hitler as chancellor, and then lobbied the Association of German Industrialists, that country's and era's version of the US Chamber of Commerce, to donate 3 million Reichsmarks to the Nazi Party for the 1933 election. It brought Hitler to power.

Hitler's sales pitch to the German people was that Jews and socialists had "stabbed Germany in the back" by secretly participating in negotiations for the Treaty of Versailles ending World War I. The Treaty imposed punitive conditions on the country, producing widespread poverty and an economic crisis.

Hitler blamed that crisis on German minorities and Germany's second largest political party, and the German people believed him. Once the Nazis took power, they changed election laws in such a way that they would never again lose.

Republicans and rightwing billionaires, of course, are trying to do the same thing right now in America.

Standing against them is the Democratic Party, although the Fritz Thyssens of today's America, billionaire members of the Koch network, are doing everything they can to prevent Democrats from ensuring fair and honest elections in 2022 and 2024 by buying off Joe Manchin and others.

Those Republican voter suppression and voter nullification laws being passed by state after state are essential to their final take-down of the Democratic Party.

Meanwhile, the billionaire Murdoch family's Fox News is working as hard as it can to make Black people and Democrats 2021's version of Hitler's 1933 Jews and Socialists.

Their top-rated morning show, Fox & Friends, wandered into a discussion Wednesday about white people being "marginalized" by the possibility of our public schools teaching the actual racial history of America.

"[T]hey are not only trying to raise up minorities and make sure the playing field is even," Brian Kilmeade said, "they're trying to take down the white culture!"

Kilmeade, in full rant mode, went on, "Why are we being marginalized on a daily basis…? And it's not even subtle! It's actually out there! It is written in black-and-white!"

This is not America's first brush with oligarchic fascism, as I lay out in my newest book, The Hidden History of American Oligarchy. President Franklin Roosevelt and Vice President Henry Wallace struggled with it in the 1940s with Charles Lindberg's America First movement.

In early 1944, the New York Times asked Vice President Henry Wallace to, as Wallace noted, "write a piece answering the following questions: What is a fascist? How many fascists have we? How dangerous are they?"

Vice President Wallace's answer to those questions was published in The New York Times on April 9, 1944, at the height of the war against the Axis powers of Germany and Japan.

As if he had a time machine and could see the "conservative" media landscape today, Wallace continued, "The American fascist would prefer not to use violence. His method is to poison the channels of public information. With a fascist the problem is never how best to present the truth to the public but how best to use the news to deceive the public into giving the fascist and his group more money or more power."

History is screaming warnings at us. Will America listen?

https://www.rawstory.com/the-deplorable ... e-culture/
Facts do not cease to exist because they are ignored.-Huxley
The illegal we do immediately; the unconstitutional takes a little longer-Kissinger
Reasoning will never make a Man correct an ill Opinion, which by Reasoning he never acquired.-Swift

2 by tonguengroover
The orange mans people wouldn't know a fascist if it slapped them upside the head. They call Antifa fascist. Here's my buddy's uniform when we go to protests. Hardly anyone knows the history of Iron Front either.
No one fucks with the beast.
Last edited by tonguengroover on Fri Jun 11, 2021 11:09 am, edited 1 time in total.
Buy the ticket; take the ride

The Three Arrows, originally designed for the Iron Front, became a well-known social democratic symbol representing resistance against monarchism, Nazism, and communism during the parliamentary elections in November 1932. The Three Arrows were later adopted by the SPD itself.[2]

I had to look it up:
https://en.m.wikipedia.org/wiki/Iron_Front

Really great article, TT.
"It is better to be violent, if there is violence in our hearts, than to put on the cloak of non-violence to cover impotence. There is hope for a violent man to become non-violent. There is no such hope for the impotent." -Gandhi

4 by F4FEver
trump the traitor is a racist hence faux news is racist..straight line, no bends..easy.
FrontSight

5 by FrontSight
The Republican Party has become the White Party, and Fox News is their Ministry of Propaganda. Tucker Carlson gladly takes up the mantle of the Reich's Minister of Propaganda.
“I think there’s a right-wing conspiracy to promote the idea of a left-wing conspiracy”
DJD100
DJD100 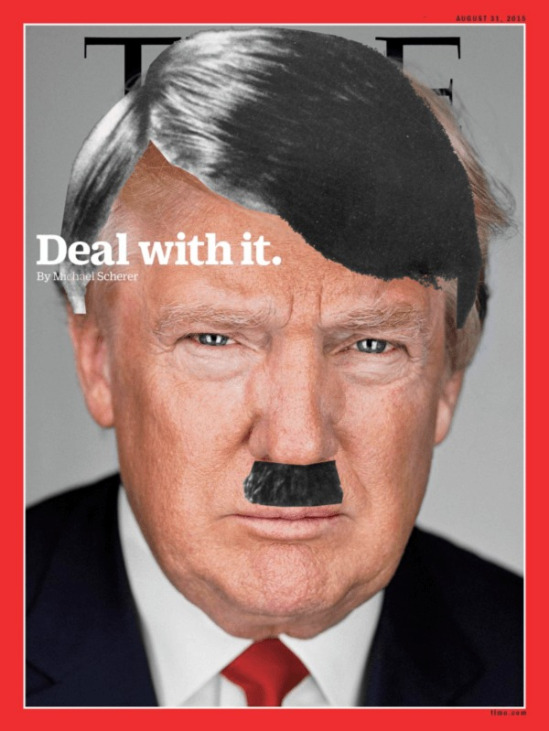 7 by DJD100
Remember, if the USA goes down, many other democracies around the world will follow most likely...

The Three Arrows, originally designed for the Iron Front, became a well-known social democratic symbol representing resistance against monarchism, Nazism, and communism during the parliamentary elections in November 1932. The Three Arrows were later adopted by the SPD itself.[2]

I had to look it up:
https://en.m.wikipedia.org/wiki/Iron_Front

Luckily Antifa and The Iron Front are loosely hardly organized group of people because the Barr and TFG would have gone after them, errr us.
That is a pretty good article. Who knew there could be so many Party's in one country.
Buy the ticket; take the ride

I can think of a few ways that this could happen, but I'd like to hear the thoughts of others on this. Can you please expand how you see this happening?
“I think there’s a right-wing conspiracy to promote the idea of a left-wing conspiracy”
9 posts
Post Reply

Re: Steve Bannon is right...oh that hurts to say..

Re: Good Samaritan allegedly shot by LEO in Colora