As a native Texan, I used to be fairly oblivious to outside perceptions of my home state. I never watched a single episode of Dallas, for example, but when I visited Western Europe in the summer of 1984, I was surprised that practically everyone I met assumed I owned horses and oil wells. Then, the following summer, when some New York City girls saw me surfing in Hawaii, they were surprised to learn I hailed from the Lone Star State. They condescendingly remarked that they thought Texans were all farmers. Later, in college, one of my favorite professors (from the upper Midwest) found my Texas drawl so off-putting that I was mildly scolded. “You’re going to be famous someday,” the professor said. “You need to learn how to speak English.”

When I backpacked through Europe in 1994 with shoulder-length dreadlocks and my Texas drawl still intact (if not even more pronounced), many Europeans thought my accent was Australian and assumed I was an Aussie. And every Aussie I met — themselves hailing from a “renegade” state — quickly recognized in me a kindred spirit.

The years passed, and I still remained relatively oblivious to outsider speculation. We’d had Ann Richards as governor and still had Molly Ivins. George W. Bush was a horrendous jagaloon, but voices with Molly’s mettle laid him bare for all to see. Sheesh, Texas had even been home to American Atheist Madalyn Murray O’Hair, and when I was young, Cowtown was a mecca for famous gay folks, including transplanted tennis legend Martina Navratilova, world-renowned pianist Van Cliburn, and heirless business magnate Sid Richardson (the latter two deceased), some of whose vast wealth fell to contemporary business legends, the Bass brothers. These three wildly visible LGBTQ-before-LGBTQ-was-cool figures never came out, but plenty of people knew. It just wasn’t a big deal.

Further back, native Texan and 34th U.S. President Dwight D. Eisenhower had helped lead us to victory in WWII but quite pointedly called out the American military-industrial complex in his farewell address. Native Texan and 36th U.S. President Lyndon Baines Johnson — the war in Vietnam notwithstanding — was the most progressive president in American history, responsible for an unprecedented amount of legislation designed to protect our air, water, and wilderness, expand quality-of-life initiatives, improve education, create Headstart, fight poverty, establish racial equality and improve workplace safety.

Let me restate: The most powerful, effective progressive in American history was a Texan.

And now his home state is one of the most backwards places on the planet.

Ann and Molly are gone, and many of our neighbors mumble “abomination” under their breaths when they see homosexuals. Texas has as many God-botherers as anywhere else in the country, and the Lone Star State attracts military-industrial profiteers like bees to honey. And my old Aussie mates live in a country where gun laws have evolved, not devolved.

For my part — like most Texans — I still don’t have any horses or oil wells or do much farming. I still, however, talk like a Texan and probably exhibit at least the half-swagger of someone oafishly belligerent — like many of my fellow Texans. I came closer to being infamous than famous and, now aged, more resemble a character on Duck Dynasty than a surfer or a world traveler. I still live in Texas, but I hardly recognize my state. I still consider myself a Texan, but I am appalled by so many Texans who don’t know or simply ignore their own history.

In Lone Star vernacular, the porch light’s on, but no one’s home. And half the folks I meet are several bricks shy of a load.

Lately, we look like superficial, xenophobic morons who never produced an LBJ or Eisenhower, much less an Ann or Molly. Nobody with any real standards wants us in their bedrooms, bathrooms, or classrooms. Our men are all hat, and we treat our women like chattel. We’re a pathetic caricature of independence and bravery and all the lies the Alamo was always based on. And we’re like an uber-obtuse exercise in word association.

Beloved Lone Star hero Willie Nelson used to say, “I’m from Texas, and one of the reasons I like Texas is because there’s no one in control.” But now Willie’s simply mistaken.

Red-state, white, male hegemony is where we’re at — and we seem to like it that way.

Today we ban honest books and refuse to punish (much less censure) dishonest, corrupt politicians. Today, Texans no longer lead — Texas is a breeding ground for fear and ignorance and moral cowards. And today, though we didn’t succeed at all as our own country or separate republic, we ludicrously threaten to secede more than we say the “Pledge of Allegiance.”

Hell, this past year Texas conservatives did their batshit-crazy best to gerrymander the state back to the middle-19th century, hoping to make us look like the Great White Hope for America in the 21st century, but to the rest of the world — and anyone paying attention in this country — we look more like a stunted confederacy of vaccs hoaxers, Roe-revokers, Jim Crow stokers, and reinstate-Scopes-Monkey-decision coaxers. We’re not a Great White Hope.

A shining example how we have fallen, but unfortunately are setting the example for other red states.
Facts do not cease to exist because they are ignored.-Huxley
"We can have democracy in this country, or we can have great wealth concentrated in the hands of a few, but we can't have both." ~ Louis Brandeis,

2 by Bisbee
Beautifully written essay. One of the most meaningful rants I’ve read in years. And it’s all true! Thank you for sharing this.

BTW, an explanation of this phrase by way of a Montanan I met while traveling in Mexico:

Our men are all hat, and we treat our women like chattel.

Cowboys in Montana like to ridicule the supposed “cowboys” in Texas by saying, “The bigger their hat the less their cattle.” Being a skinny immigrant that grew up on the Best Coast, I found this infighting of big Americans to be highly amusing.

Anyway, CA and NY are getting hit hard by Covid variants now but the struggle is honest, in your face pandemic struggles since breakthrough cases are a problem with the omicron variant. I don’t see our current hospitalizations entirely the result of prideful ignorance and mere unwillingness to take a vaccine if only because the death rates vs hospitalization rates are so low compared to the spike before vaccine availability. As another article posted recently about the impending Covid hit that rural America is about to experience, it is choosing the vaccine that is making surviving Covid-19 survivable and yet so many prideful, frightened, angry Americans are failing to make the correct choice. Texas, it seems, is the new capital of this failed ethos in America. Pride and ignorance is a deadly combination in any situation but particularly during a pandemic.
"It is better to be violent, if there is violence in our hearts, than to put on the cloak of non-violence to cover impotence. There is hope for a violent man to become non-violent. There is no such hope for the impotent." -Gandhi

3 by sig230
And we continue to do our best to beat yesterday's 7 day moving average new covid-19 case figures.
To be vintage it must be older than me!
Stories coming to you from Deep South Texas!
The next gun I buy will be the next to last gun I ever buy. PROMISE!
wooglin
wooglin

4 by wooglin
Goat ropers need love too. Or so I've heard.

Our men are all hat, and we treat our women like chattel.

Cowboys in Montana like to ridicule the supposed “cowboys” in Texas by saying, “The bigger their hat the less their cattle.” Being a skinny immigrant that grew up on the Best Coast, I found this infighting of big Americans to be highly amusing.

In Texas we say that someone is "all hat, no cattle" if they are pretend cowboy, like most of them are these days. Think George W Bush clearing brush on his "ranch".
98+ recreational uses of firearms
1 defensive use
0 people injured
0 people killed

6 by F4FEver
Great essay. I am SO glad I live in a blue state. Yup, some warts but overall...VERY happy to be in blue state(Colorado). I lived in south Texas for 14 months, longest 14 months of my life.

7 by CDFingers
I agree--great essay. I sure miss Molly, and I'm out here in California. I bet there's a lot of Texans who are moderate but just don't say anything--recently, that is. I am hoping that pile of moderates speaks in November in favor instead of against democracy among fair elections. 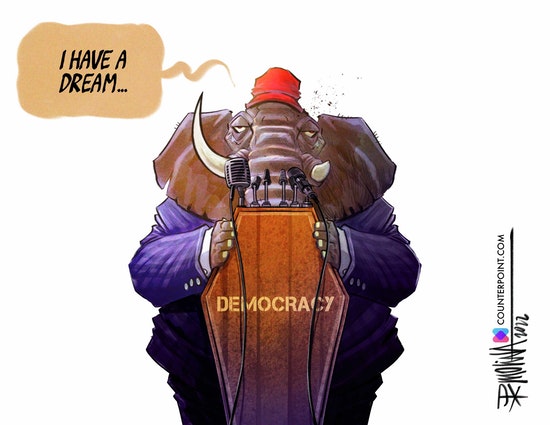 .
If I had a gun for every ace I've drawn
I could arm a town the size of Zhytomyr

8 by Wino
I truly miss Texas past 20+ straight years of Dem's running the state. Has been a down hill slide since shrub elected guv - one piece of crap after another elected to head up Texas. Really sad situation. It's like the hot tub time machine has turned into a pig sty.
"Being Republican is more than a difference of opinion - it's a character flaw." "COVID can fix STUPID!"
The greatest, most aggrieved mistake EVER made in USA was electing DJT as POTUS.

9 by highdesert
Great piece, they are stereotypes and we all suffer from them. We all remember Ann Richards saying at a political rally that George HW Bush was born with a silver foot in his mouth, he laughed and sent her a pin with a silver foot on it and she wore it. Molly Ivins was a great writer, Texas born and raised, but she graduated from the posh and exclusive Smith College in MA and got her master's from the Columbia University School of Journalism in NYC. It's the home of the Pulitzer Prizes.

"Havin' fun while freedom fightin' must be one of those lunatic Texas traits we get from the water - which is known to have lithium in it - because it goes all the way back to Sam Houston, surely the most lovable, the most human, and the funniest of all the great men this country has ever produced."

"Texas liberals are the camels of good news. We can cross entire deserts between oases."

"Everyone is entitled to their own opinion, but not their own facts." - Daniel Patrick Moynihan
9 posts
Post Reply

Re: Democrats losing ground with female voters
If a neoliberal is the only Democratic Party candi
sikacz, Wed May 25, 2022 1:28 pm

Re: Alleged shooter at elementary school in Uvalde
People don’t get that fucked up without an underly
sikacz, Wed May 25, 2022 1:22 pm